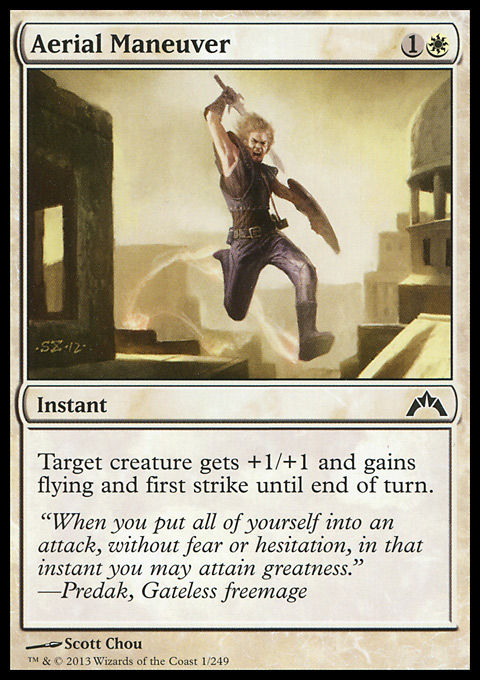 Instant
Target creature gets +1/+1 and gains flying and first strike until end of turn.
"When you put all of yourself into an attack, without fear or hesitation, in that instant you may attain greatness."
—Predak, Gateless freemage 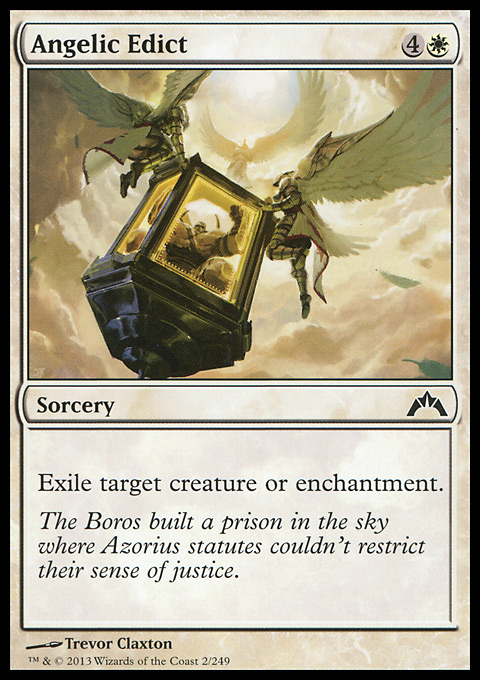 Sorcery
Exile target creature or enchantment.
The Boros built a prison in the sky where Azorius statutes couldn't restrict their sense of justice. 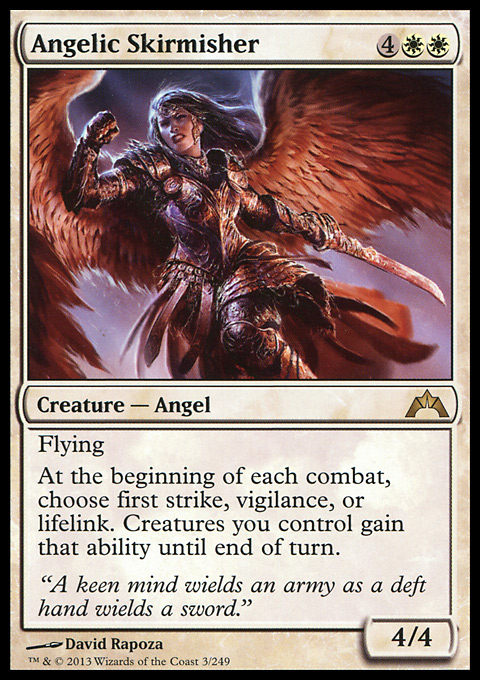 Creature - Angel
Flying
At the beginning of each combat, choose first strike, vigilance, or lifelink. Creatures you control gain that ability until end of turn.
"A keen mind wields an army as a deft hand wields a sword."
4/4 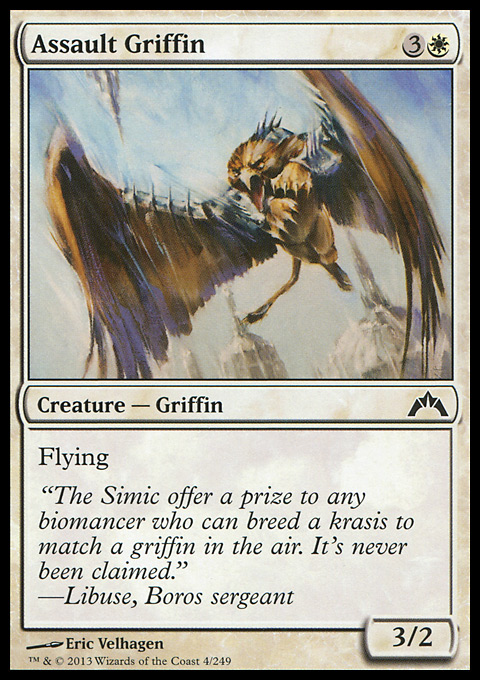 Creature - Griffin
Flying
"The Simic offer a prize to any biomancer who can breed a krasis to match a griffin in the air. It's never been claimed."
—Libuse, Boros sergeant
3/2 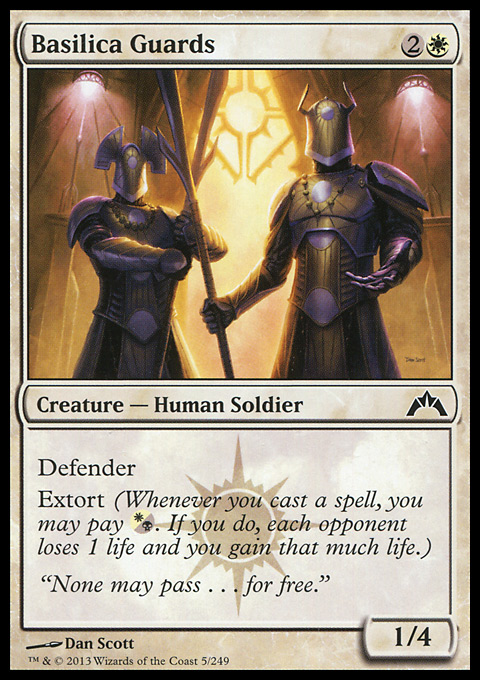 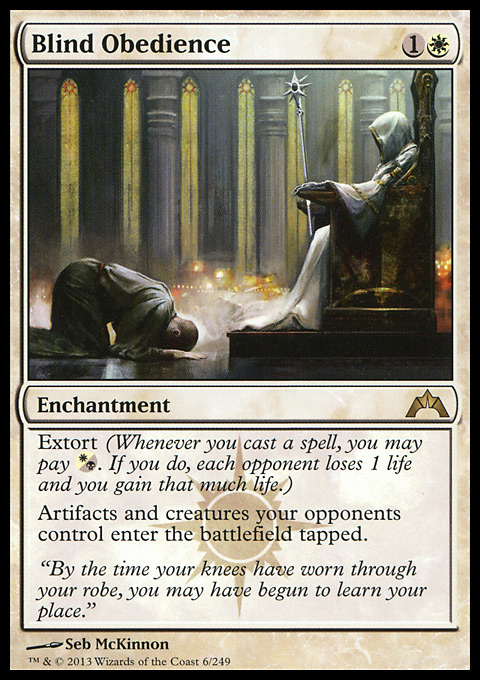 Enchantment
Extort
Artifacts and creatures your opponents control enter the battlefield tapped.
"By the time your knees have worn through your robe, you may have begun to learn your place." 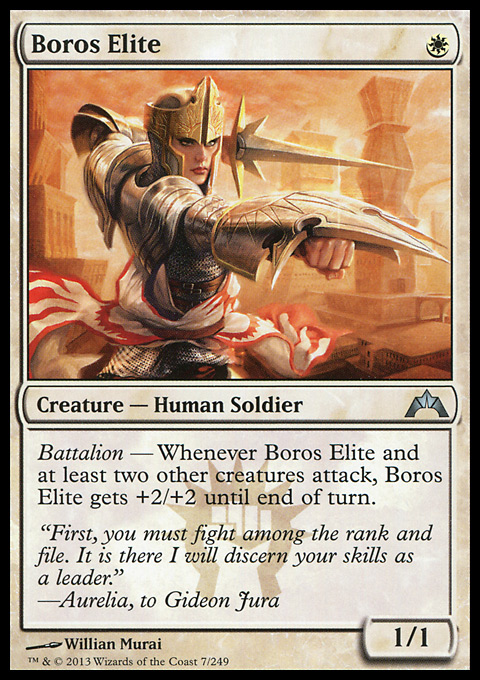 Creature - Human Soldier
Battalion — Whenever Boros Elite and at least two other creatures attack, Boros Elite gets +2/+2 until end of turn.
"First, you must fight among the rank and file. It is there I will discern your skills as a leader."
—Aurelia, to Gideon Jura
1/1 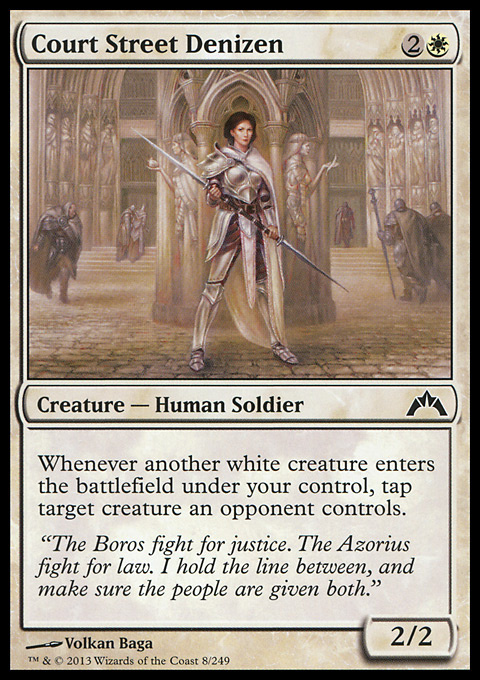 Creature - Human Soldier
Whenever another white creature enters the battlefield under your control, tap target creature an opponent controls.
"The Boros fight for justice. The Azorius fight for law. I hold the line between, and make sure the people are given both."
2/2 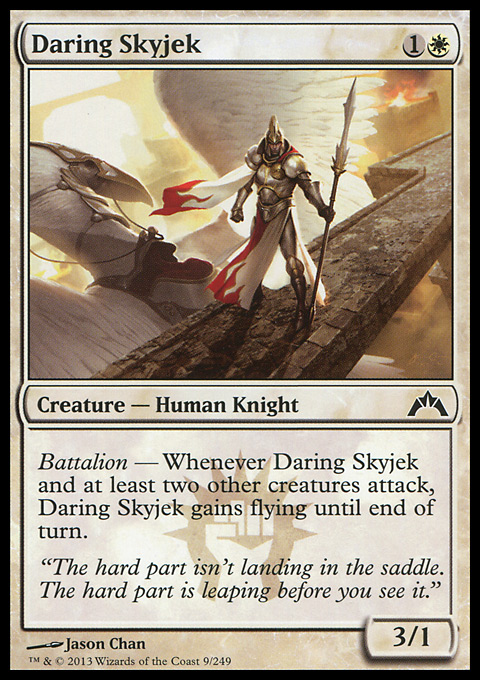 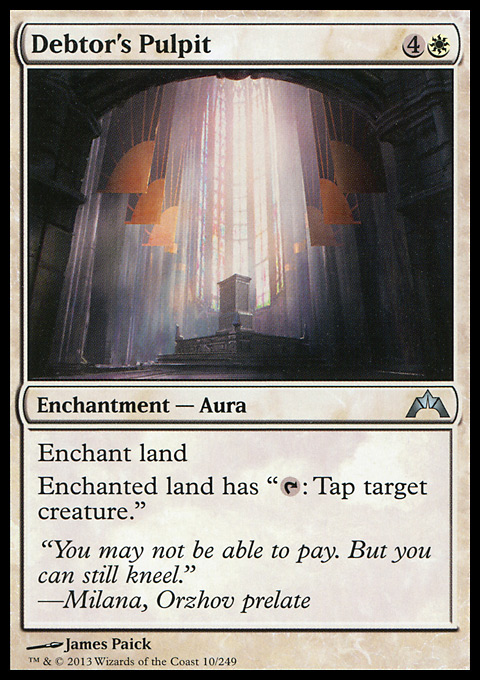 Enchantment - Aura
Enchant land
Enchanted land has "{T}: Tap target creature."
"You may not be able to pay. But you can still kneel."
—Milana, Orzhov prelate 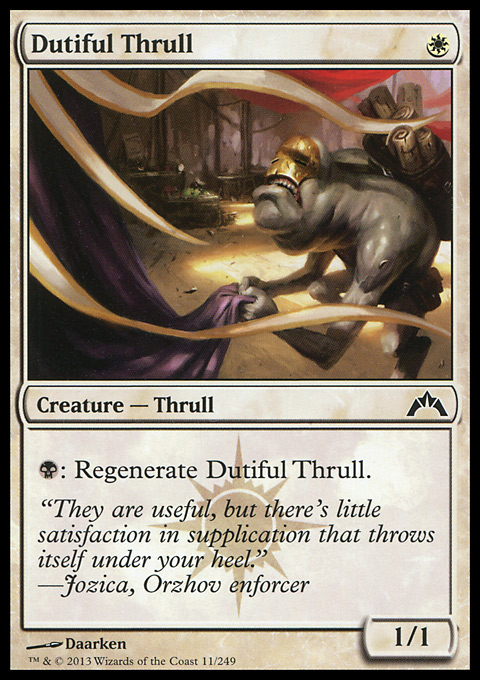 Creature - Thrull
{B}: Regenerate Dutiful Thrull.
"They are useful, but there's little satisfaction in supplication that throws itself under your heel."
—Jozica, Orzhov enforcer
1/1 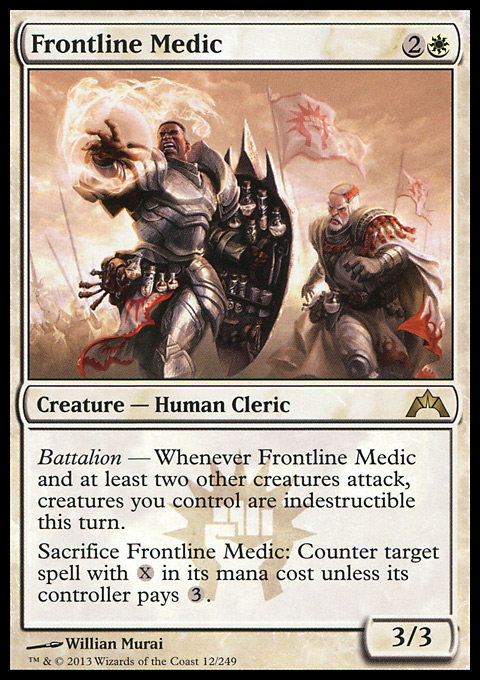 Creature - Human Cleric
Battalion — Whenever Frontline Medic and at least two other creatures attack, creatures you control gain indestructible until end of turn.
Sacrifice Frontline Medic: Counter target spell with {X} in its mana cost unless its controller pays {3}.
3/3 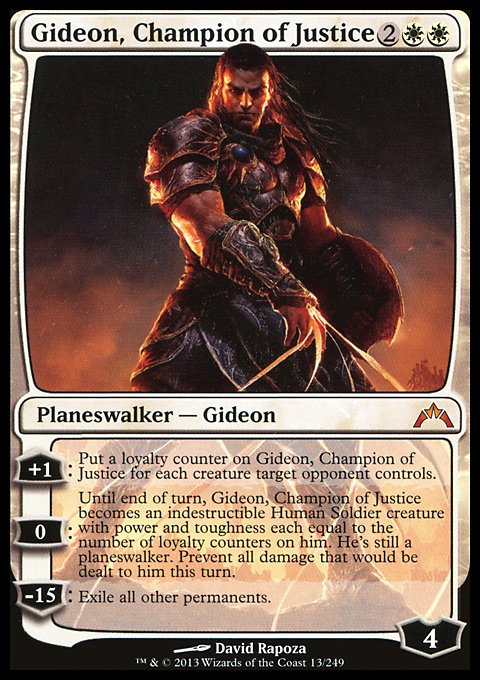 Legendary Planeswalker - Gideon
[+1]: Put a loyalty counter on Gideon, Champion of Justice for each creature target opponent controls.
[0]: Until end of turn, Gideon, Champion of Justice becomes a Human Soldier creature with power and toughness each equal to the number of loyalty counters on him and gains indestructible. He's still a planeswalker. Prevent all damage that would be dealt to him this turn.
[–15]: Exile all other permanents.
Loyalty:
4 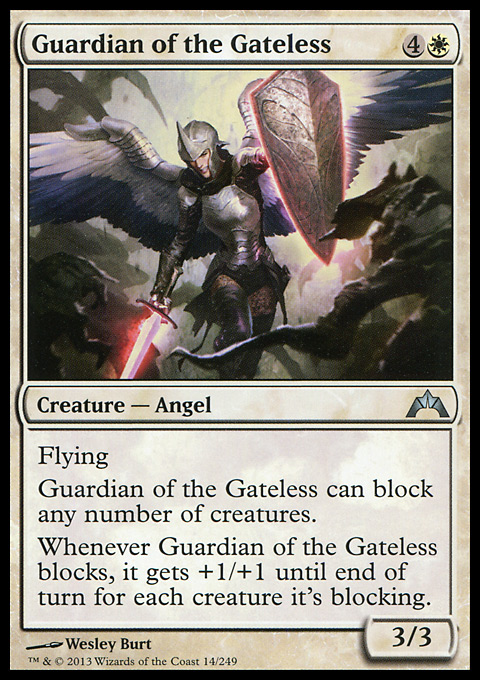 Guardian of the Gateless {4}{W} 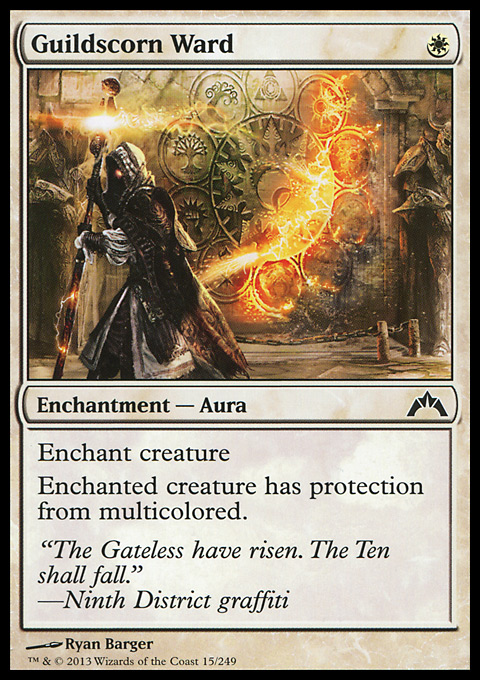 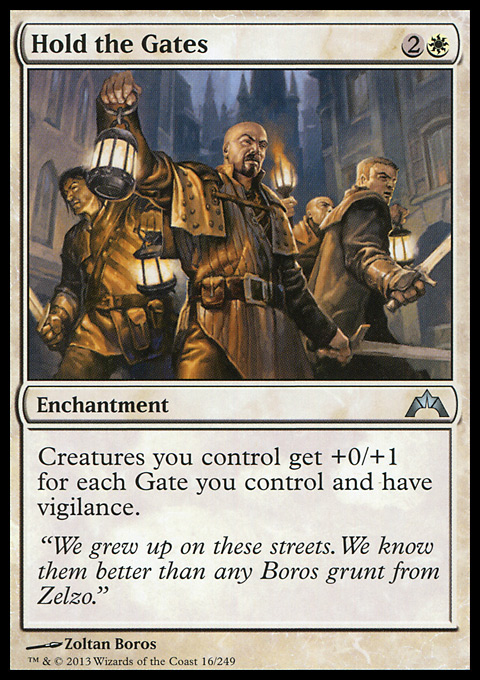 Enchantment
Creatures you control get +0/+1 for each Gate you control and have vigilance.
"We grew up on these streets. We know them better than any Boros grunt from Zelzo." 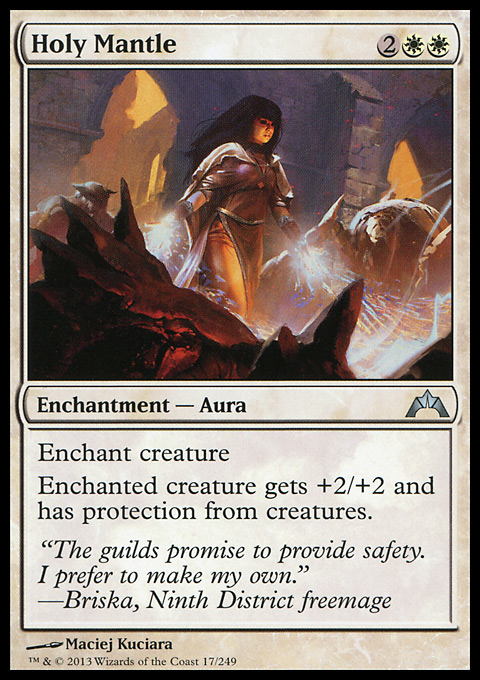 Enchantment - Aura
Enchant creature
Enchanted creature gets +2/+2 and has protection from creatures.
"The guilds promise to provide safety. I prefer to make my own."
—Briska, Ninth District freemage 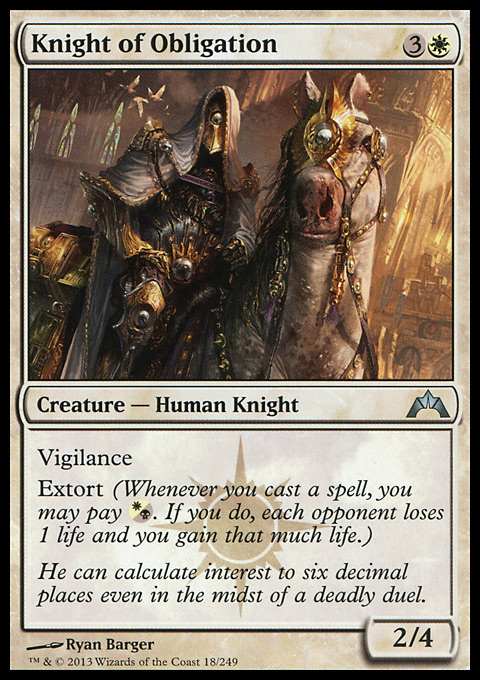 Creature - Human Knight
Vigilance
Extort
He can calculate interest to six decimal places even in the midst of a deadly duel.
2/4 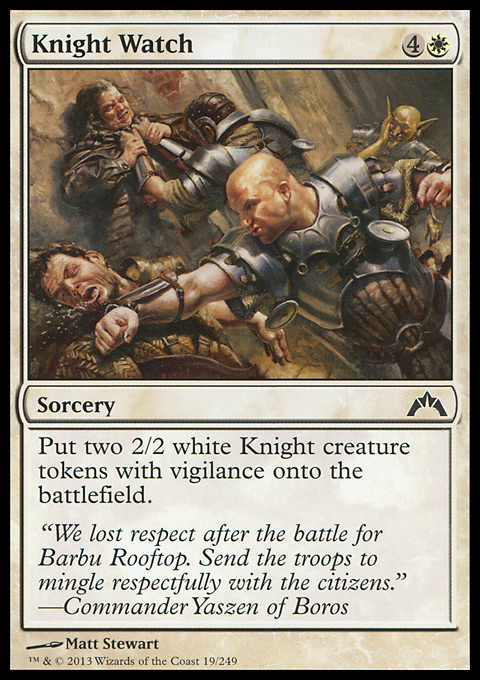 Sorcery
Create two 2/2 white Knight creature tokens with vigilance.
"We lost respect after the battle for Barbu Rooftop. Send the troops to mingle respectfully with the citizens."
—Commander Yaszen of Boros 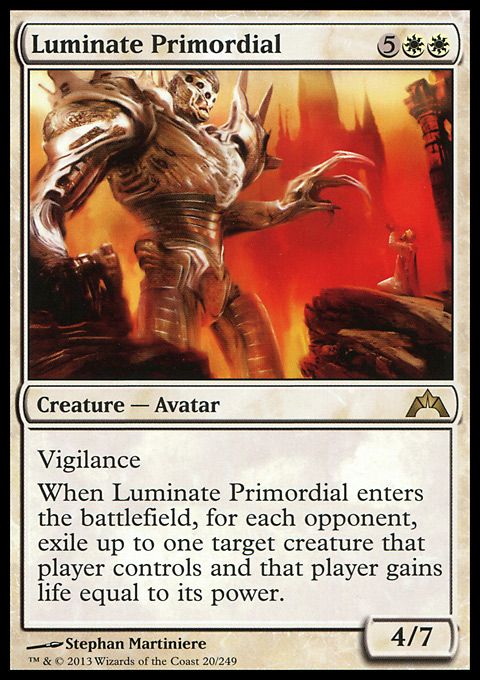 Creature - Avatar
Vigilance
When Luminate Primordial enters the battlefield, for each opponent, exile up to one target creature that player controls and that player gains life equal to its power.
4/7 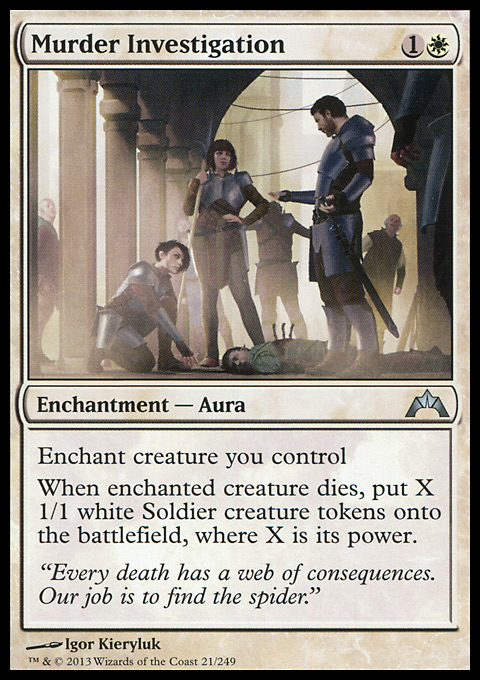 Enchantment - Aura
Enchant creature you control
When enchanted creature dies, create X 1/1 white Soldier creature tokens, where X is its power.
"Every death has a web of consequences. Our job is to find the spider." 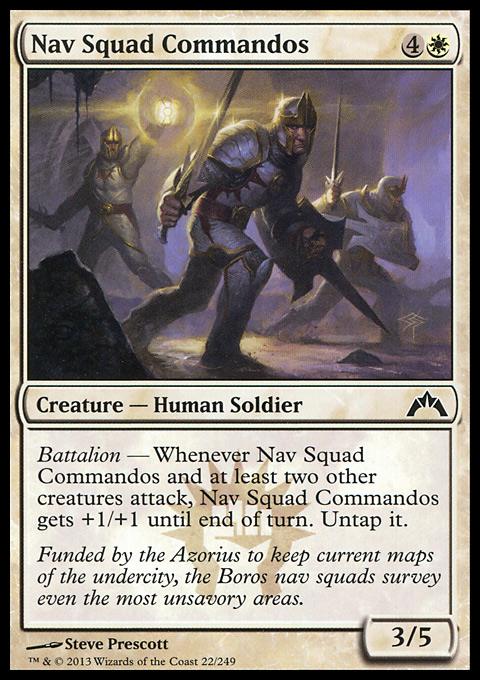 Creature - Human Soldier
Battalion — Whenever Nav Squad Commandos and at least two other creatures attack, Nav Squad Commandos gets +1/+1 until end of turn. Untap it.
Funded by the Azorius to keep current maps of the undercity, the Boros nav squads survey even the most unsavory areas.
3/5 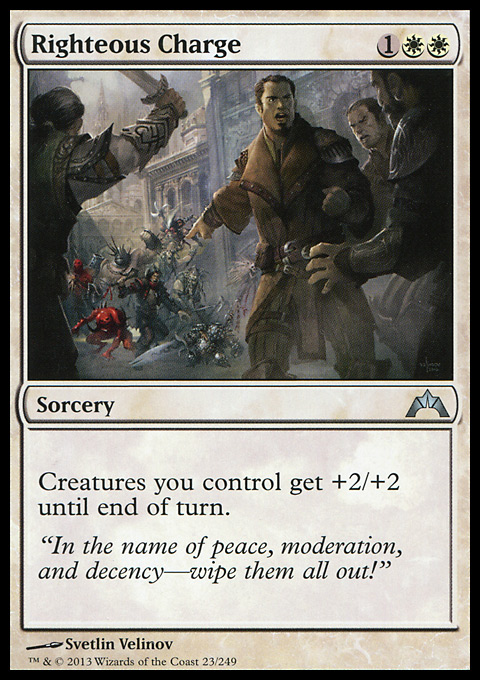 Sorcery
Creatures you control get +2/+2 until end of turn.
"In the name of peace, moderation, and decency—wipe them all out!" 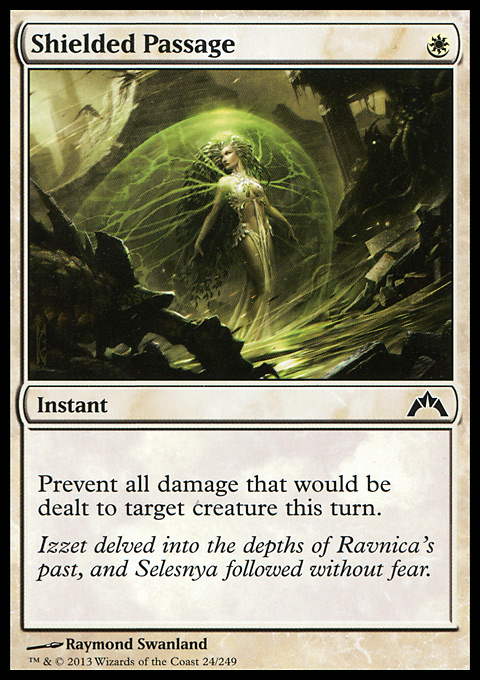 Instant
Prevent all damage that would be dealt to target creature this turn.
Izzet delved into the depths of Ravnica's past, and Selesnya followed without fear. 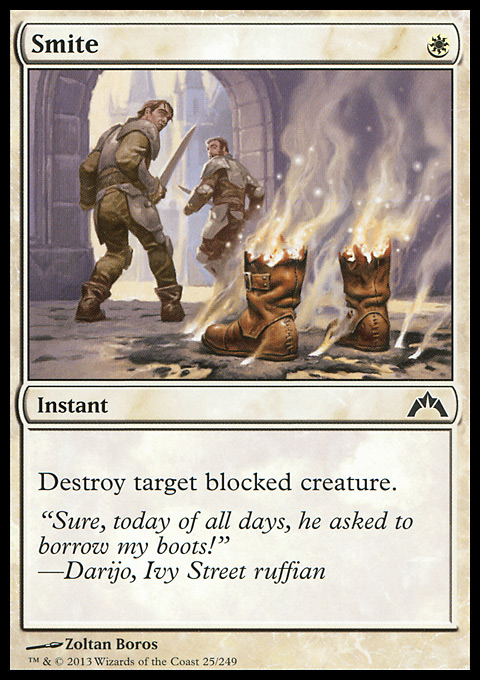